The Henry Cavill / Superman situation has developed…. kind of

Yesterday, news broke that Henry Cavill is reportedly out of the role of Superman. The news created A HUGE amount of interest.

When I say “A HUGE amount of interest” I basically mean the internet exploded. Many, many, many, MANY fans were unhappy about the news, commenting that Cavill is one of the only good things about the recent DC movies.

Anyway, here’s what happened next…

Cavill’s manager, Dany Garcia took to social media to post a comment to kind of calm things down a little. She posted a response to the story which neither confirmed or denied the news, nor calmed the situation down.

She said: “Be peaceful, the cape is still in his closet. @wbpictures has been and continues to be our partners as they evolve the DC Universe.”

Warner Bros. then put out a statement (via The Hollywood Reporter) which said:

“We have a great relationship and great respect for Henry Cavill that continues to remain unchanged. Additionally we have made no current decisions regarding any upcoming Superman films.”

Once again, this statement was designed to calm down the fan backlash, but didn’t really say anything about Cavill’s future as the Man of Steel. The studio said it has respect for the actor and that it has no plans to make any new Superman films – something we knew already.

Meanwhile, while all this was going on another news story began to circulate which suggested that Warner Bros. was considering a replacement for Cavill in the form of Black Panther (2018) actor, Michael B. Jordan. This story originated from Deadline, who commented that the studio had considered casting the actor as Superman at some point in the future.

Once again, this news was not met with a positive response from fans. In fact, this stoked the backlash flames even further.

Any truth in the story? Who can say? But many news sites took the story and ran with it.

Next up, Warner Bros./the Aquaman movie took to social media to post a positive movie-tie-in story about cleaning up the ocean. The post had NOTHING to do with the Cavill situation… but that didn’t stop fans from using the post as a way to comment about the Superman news.

Pretty much all of the comments on the Aquaman post were about the Cavill/Superman situation and had nothing to do with the post itself. Many of these comments lambasted Warner Bros. for its decisions regarding Cavill (as well as decisions made within the DC movies as a whole) and the post demonstrated that there is now a lot of ill-feeling regarding these films.

Meanwhile, while all this was going on Cavill took to social media to post an ambiguous and frankly quite bizarre video of himself lifting a Superman action figure. 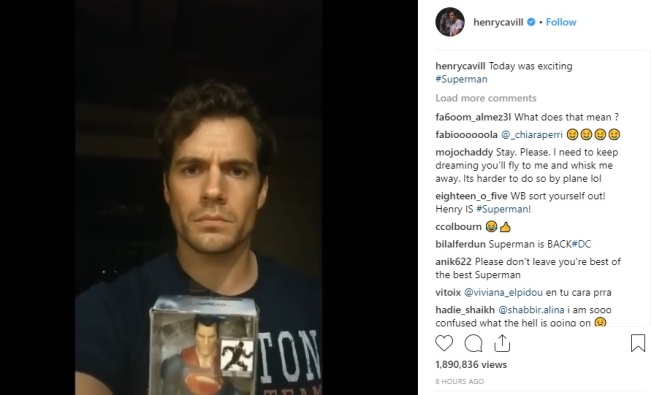 Cavill made no further posts/statements.

So, what can we sum up from all this?

1.) While the reports of Cavill’s exit have not been confirmed, they’ve not been denied either. In fact, the comments from both Cavill’s manager and Warner Bros. are specifically vague, suggesting the news is true and Cavill’s exit is on the cards.

2.) Fans are NOT happy. Really not happy. The general feeling is that if Cavill is out of the series then this is yet another mistake for the DC films and any goodwill that exists is evaporating quickly. This backlash, if not addressed quickly, could have a very big impact on the forthcoming Aquaman movie which opens in three months’ time.

3.) Cavill is not in a position to confirm or deny the reports, because the door has not closed yet. It’s likely it is closing, but until it’s 100% a done deal, there’s always a possibility that things may play out differently.

4.) As for the Michael B. Jordan report…. take it with the BIGGEST pinch of salt. Jordan isn’t going to be Superman and even if he was under consideration, Warner Bros. aren’t planning any Superman movies at present, so nothing’s going to happen with this piece of news.

Personally, I feel like this whole situation has demonstrated one very clear thing: The majority of fans love Cavill as Superman and really want to see more from him, including another solo movie. This is a positive thing to take away from this whole situation.

Up until now, Warner Bros. had been dragging its heels over a sequel to Man of Steel and let’s be honest, the studio had no intention of going in this direction. Hopefully now the studio can see how much fans would prefer to see another Superman movie there might be movement on a sequel.

Studios like money. They also like to follow the money. If they can see that people want a Superman movie they might actually deliver. Maybe not now, but possibly sooner than originally planned. Sure, they had no intention before this story blew up, but now, maybe they will reconsider.

Let’s see what happens next…