The Star Wars backlash shows no signs of disappearing

The Star Wars backlash is showing no sign of disappearing and now Logan director, James Mangold has thrown his voice into the discussion.

The director – who is reportedly working on a Boba Fett movie for Lucasfilm/Disney – took to Twitter to pass comment on how difficult it can be to spearhead a film in an already established series. He said: “At the point when work writing & directing big franchises has become the emotionally loaded equivalent of writing a new chapter of The Bible (w/ the probable danger of being stone & called blasphemer), then a lot of bolder minds r gonna leave these films 2 hacks & corp boards.” 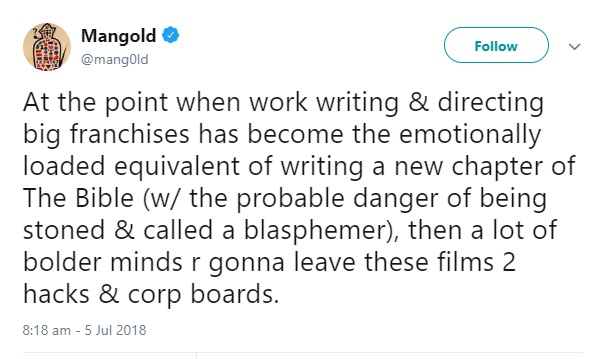 Mangold’s initial tweet kick-started a (very) long discussion on the state of the current Star Wars backlash, with the director taking part in various conversations with other users about The Last Jedi and the film process in general. Some of the comments Mangold agreed with, others he did not.

In response to one user, Mangold said: “For the 400th time, no1 told you to accept what you’re given or u have to like something u don’t. The only message (over & over again) has been this: Do not channel your disappointment into aiming harassing personal tweets at creators as if they had assaulted u.”

Ultimately Mangold opted out of the conversation, as it was showing no signs of ending, but what this kind of discussion suggests is that the Star Wars backlash isn’t going to go away anytime soon. Will it ever? Who knows.

If you want to read the full conversation, you can see the entirety of the discussion on James Mangold’s Twitter feed. Some of the comments and arguments being put forward make sense, some not at all.