I recall A Knight’s Tale coming out on VHS because back during the early ’00s I worked in a video rental store. A Knight’s Tale was a very popular title for us, which not only rented well but also sold well too.

But I never watched it.

In the video store where I worked, we had a VCR hooked up to a small television screen so we could preview videos to our customers. There was no company-wide directive as to what we could show on the screen, however, the films that we played had to be either a U or a PG certificate.

This certificate restriction meant we often played a lot of the same titles – especially if the film had a really long running time and didn’t require us to keep changing the tape. As such, many movies from the early ’00s (Lord of the Rings, Shrek, Harry Potter etc) were in continuous rotation at our store.

As A Knight’s Tale was a popular film, and it was a PG, it got played a lot. So much so, that I never had a desire to watch it outside of work, because it would often play out while I was doing a shift and large chunks of the dialogue had seeped into my brain.

Hmm.. so that means I have watched this film countless times then, right?

Nope. Other than snippets of the movie and random bits of dialogue that I absorbed through osmosis, I have never watched A Knight’s Tale.

Oh, I’ve seen a few minutes here and there, but never the whole thing. And the scenes I have viewed have never been in any specific order.

As for what I know about A Knight’s Tale, well, I know Heath Ledger, Paul Bettany, and Mark Addy are amongst the cast and that the film is about a knight…

Yeah, I really can’t remember much about this film. So, today I am viewing A Knight’s Tale, from start to finish, to finally see what all the fuss is about.

4mins – Heath Ledger is planning on taking part in a joust. This film is about jousting, isn’t it? I vaguely recall it has jousting in it.

10mins – Ledger didn’t win, but he has plans to continue jousting. Good for him! Always chase your dreams.

12mins – I’m 12 minutes into the movie and the soundtrack is proving to be fun. Queen’s We Will Rock You and War’s Low Rider have played so far. I like what I’m hearing.

14mins – One thing I’m noticing is how beautiful the scenery looks in this film. It feels all very summery – which is helping to cheer up this grey day.

25mins – I’m now 25 minutes into this film and Paul Bettany has been naked twice. That’s a lot of naked Bettany.

40mins – I’m going to get a great deal of hate for this, but *takes a deep breath* I’m not being won over by A Knight’s Tale. There’s nothing particularly wrong with the film, it’s just not grabbing my attention.

I once wanted to work in Spudulike. I wouldn’t say it was my main ambition in life, but when I was about ten-years-old I seriously considered it.

*Stares out of the window wistfully, reflecting on a missed career opportunity at Spudulike*

One of my school teachers told me I was silly for even thinking about it, and I should aim higher than jacket potatoes. Condescending prick.

Had I taken up a career at Spudulike after I left school, I’d probably have my own house by now, and be a good way into paying off a mortgage… but alas, I did not. I looked beyond Spudulike, got saddled with years of university debts, got stuck in an endless loop of renting increasingly more expensive apartments… and now can only afford to eat jacket potatoes.

Oh… it looks like some stores have re-opened in recent years. The dream lives on!

*Stares out of the window again, thinking about a career at Spudulike*

And now back to the movie….

59mins – Nice little dance sequence going on here, all set to Golden Years by David Bowie. Another song from the 1970s.

Hmm… I forgot that we went through a ’70s revival during the early ’00s. The Charlie’s Angels films were in cinemas, Starsky and Hutch was shortly set to hit the big screen, and Flares nightclubs were a thing.

I might have to buy a pair of bell-bottom jeans and plan a night out!

And back to the film again…

1hr 5mins – I’m aware I’ve just spent the last few minutes Googling ‘Spudulike’ and ‘Flares‘ rather than paying much attention to this film. I will try harder.

1hr 10mins – On a side note, Ledger has a genuine likeability in this film. I loved him in 10 Things I Hate About You, he was great in Brokeback Mountain, and of course he was AMAZING in The Dark Knight, but this is another example of why he had such a promising career ahead of him.

1hr 33mins – The Boys are Back in Town is currently playing. Once again, the soundtrack is keeping things going.

1hr 48mins – For those reading this post, who have also never seen A Knight’s Tale, but want to know what it’s all about, the story is about a guy who passes himself of as a knight in order to enter jousting tournaments. Up until this point in the film, he’s gotten away with it – but now the secret is out. Is this where the shit hits the fan?

1hr 55mins – Oh, drama over. He’s fine and has been given a knighthood.

Have you seen some of the people that get given knighthoods these days?

2hrs 2mins – Into the last ten minutes of the film and there’s more drama. Ledger is wounded in a joust and it’s make or break time. Will he win the day? I’d put money on it.

2hrs 7mins – Yeah, Ledger won the tournament and won the heart(s) of his love interest/the audience.

I think it’s pretty clear what my feelings are. A Knight’s Tale didn’t really do anything for me I’m afraid.

As stated above, there’s nothing wrong with this film, but personally I just couldn’t connect with it. But yeah… I guess it was alright.

No, but maybe this is why it has taken so long to get to – maybe subconsciously I knew I wasn’t all that bothered about it.

Thanks for reading this post about A Knight’s Tale. For more movie-related posts, check out one of the recommended reads below.

Running It’s A Stampede! is a labour of love, and I truly hope you all find this blog fun and useful. I spend a great deal of time researching and compiling content, to ensure I can offer an informative experience for all.

If you would like to support It’s A Stampede! with a one-off donation (no more than the price of a comic) it would be appreciated. This donation could help towards running costs, or may just buy me a coffee – either way, it all helps keep It’s A Stampede! ticking along. 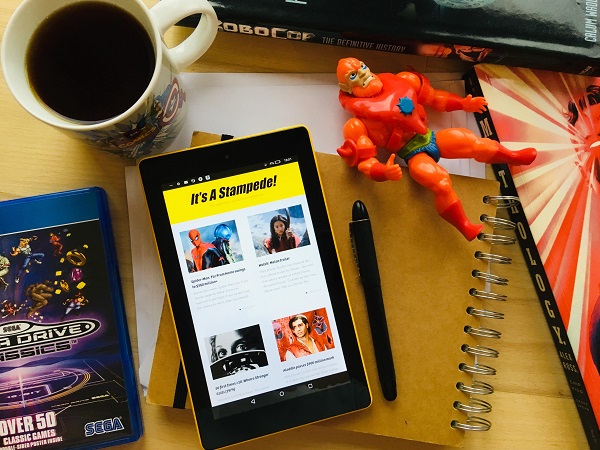 Donate £3.99 to It's A Stampede! and help me continue to deliver great content.