iZombie will return – but don’t get too comfortable

If you happen to be a fan of iZombie then I’ve got one of those good news/bad news situations for you.

The CW has renewed iZombie for a fifth season. Hurrah – the adventures of zombie mortician, Liv will continue.

And now the bad news.

iZombie star, Rose McIver has confirmed that this will be the final season of the show.

Taking to Twitter, McIver, said: “So the fifth season of #iZombie will be our last. I am therefore committed and excited to make it the best one yet! Really proud to be on a show that celebrates the misfits and I pinch myself every day that I get to be a part of the iZombie world with you guys. Thank you.” 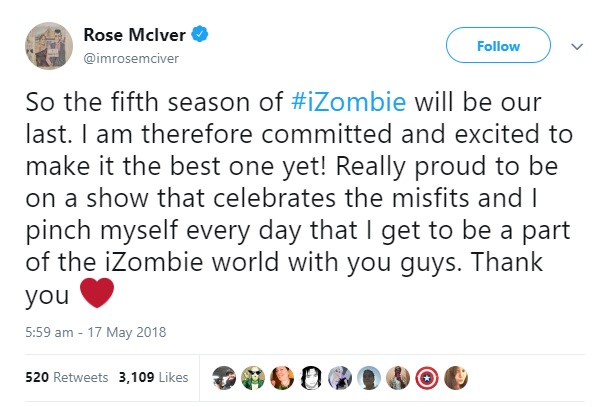 I’m a little behind on the most recent season of iZombie, but I am a fan of the series overall – seeing it as a gem of a show that doesn’t get the recognition it deserves. I’ll be sad to see it go, but at least it has one final season to reach (hopefully) a satisfying conclusion.

Loosely based on Vertigo comic of the same name, iZombie first hit TV screens in 2015. The show airs on The CW in the US and is available to stream on Netflix in the UK.