So, no actual announcement today. But tomorrow, maybe.

I’ve also reached the point where the word ‘announcement’ no longer has any meaning.

Of course, with no clear indication as to what tomorrow’s announcement will be (there’s that word again), EVERYONE is currently speculating as to what the big news is all about. Over on Marvel’s Instagram page the suggestions range from a new line-up for The Avengers and an explanation as to why Hawkeye is missing from the Infinity War trailer to a Fallout/Marvel crossover and… er… an Aquaman teaser trailer?!?!

I have a feeling it won’t be that last one.

The default suggestion, whenever Marvel prepares the way for a BIG ANNOUNCEMENT, is that it’ll be Fantastic Four-related. As much as I’d like this to be true, I’m pretty sure the FF are on their way back to the pages of Marvel Comics anyway, so there probably won’t be a specific announcement for this.

Let’s just hope this isn’t like the last time that Marvel teased a huge announcement (back in January 2017), only for it to turn out to be a new Avengers game. Hey, I’m not knocking Marvel games, but that announcement was pretty ‘meh’ as far as big announcements go.

So, what could it be? 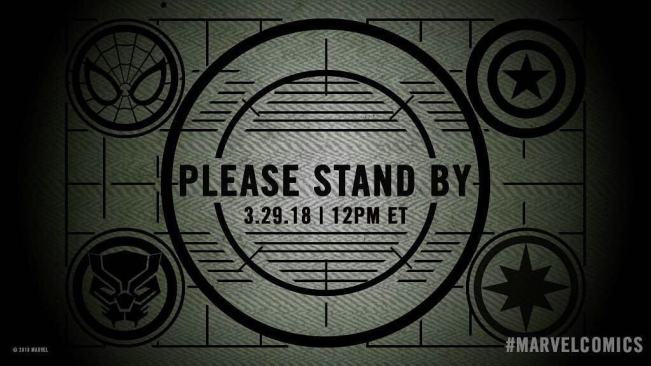 The hashtag used in the teaser image says ‘#MarvelComics’, suggesting it is something to do with the comics (rather than the films). However, the overall design of the ‘Please Stand By’ imagery suggests it could be TV-related.

The icons used in the image are of Spider-Man, Black Panther, Captain America and Captain Marvel, but again, this might be a red herring.

Oh Marvel, why are you doing this to me? I am now going to spend the next 24 hours wondering about all the possibilities.

I’m also starting to wonder where the Aquaman teaser is too. Hey, DC, are you even awake?